From Wikipedia, the free encyclopedia

Jump to navigationJump to search

The Chevrolet Corvette (C3) is a sports car that was produced from 1967 to 1982 by Chevrolet for the 1968 to 1982 model years. Engines and chassis components were mostly carried over from the previous generation, but the body and interior were new. It set new sales records with 53,807 produced for the 1979 model year.[4] The C3 is the third generation of the Chevrolet Corvette, and marks the second time the Corvette would carry the Stingray name, though only for the 1969 - 1976 model years. This time it was a single word as opposed to Sting Ray as used for the 1963 - 1967 C2 generation. The name would then be retired until 2014 when it returned with the release of the C7.

The 1975 model was advertised as "a more efficient Corvette,"[26] as service intervals were extended and electronic ignition and the federally mandated catalytic converter were introduced with "unleaded fuel only" warnings on the fuel gauge and filler door. Dual exhaust pipes were routed to a single converter, then split again leading to dual mufflers and tailpipes. Starting this year, tachometers were electronically driven. The Corvette began to be influenced by the metric system as speedometers now displayed small subfaces indicating kilometers-per-hour. 75's featured revised inner bumper systems with molded front and rear simulated bumper guards. The urethane rear bumper, now in its second year, reappeared as a one-piece seamless unit. This was the final year for Astro Ventilation. Power bottomed out this year — the base engine produced only 165 hp (123 kW) and the only remaining optional motor, the L-82, dropped an astonishing 45 hp (34 kW), managing to deliver 205 hp (153 kW). With no larger engine available, L-82 hood emblems began to appear on cars so equipped. Unchanged was the standard rear axle ratio for the base engine, which remained at 3.08 with automatic and 3.36 with manual transmission. This was the last convertible for the 1968-82 third-generation and only 12% of the cars were ordered as such. As in previous years, a folding top came standard with roadsters and a body color or vinyl covered hardtop was optional at additional cost.[27] Anticipating further federal safety restrictions, Chevrolet believed it would be Corvette's last soft-top model ever but the convertible returned in 1986. Due to the state's strict emissions standards, this was the last year Chevrolet installed the L-82 engine in a Corvette destined for California.[28]

Car and Driver recorded a respectable 7.7 second 0-60 mph time in a 1975 base engine-automatic, making the Corvette still one of the fastest cars available at the time. C&D said: "The Corvette feels highly competent with power-everything to help you guide the long body around..."[29]

1976 models featured steel floor panels shielding the catalytic converter exhaust. These steel floor panels weighed less than the previous fiberglass floor and reduced interior noise levels. Horsepower rose to 180 hp (134 kW) for the base L-48 engine; 210 hp (157 kW) for the optional L-82. To further reduce cabin noise levels, cowl induction was dropped in favor of the air cleaner ducted over the radiator, picking up outside air from the front of the car, thus reducing wind turbulence at the base of the windshield. The hood was carried over, with its cowl vent grille and induction system opening becoming non-functional. The optional cast aluminum wheels were finally made available, which reduced the unsprung weight of the car by 32 pounds. Nearly 15% of the cars were ordered with the new wheels at a cost of $299. A standard steel rim spare was used. This was the last year for optional white striped tires, as 86% of the cars were being delivered with the optional white lettered tires.[15] A new rear nameplate for the rear bumper cover was introduced, eliminating the individual "Corvette" letters used since 1968. An unwelcome change was the "Vega GT" 4-spoke steering wheel, although its smaller diameter did provide extra room and eased entry/exit. The steering wheel, color-keyed to the interior, continued on 1977 through 1979 models, limited to non-tilt wheel cars only. GM's "Freedom" battery, a new sealed and maintenance-free unit, was now installed in all cars.[15] The rear window defroster option was changed from the forced-air type of previous years to the new "Electro-Clear" defogger, an in-glass heated element type.[15] Even without a convertible model, the Corvette still set new sales records.

Car and Driver recorded 6.8 second 0-60 mph times in both L-48 and L-82 4-speed equipped 1976 Corvettes. The magazine ordered an L-48 4-speed for a 4,000-mile (6,400 km) road trip to Alaska. C&D summarized: "The Corvette was a big hit–we expected and thoroughly enjoyed that–but we were surprised at how well it withstood the ordeal...once we recovered from the trip we conceded that we'd developed new respect for a car we'd long regarded as something of a put on. In every sense of the word, our Yukon Corvette proved to be tough and we'd have to say that even the production versions impressed us as coming closer to being real touring cars than we might ever have thought. There's a lot more sincere ring now to our stock answer to the question, Why a Corvette?" [30]

1977 saw the steering column repositioned 2 inches (51 mm) closer to the dashboard to allow a more "arms out" position for the driver. The custom interior with leather seat trim was now standard, with cloth and leather a no-cost option. A redesigned center console permitted universal Delco radio options. One consequence of this modification was that an 8-track tape player was now available as an option. Auxiliary gauges were restyled and the ammeter was replaced with a voltmeter.[31] The sun visors were redesigned to swivel so as to provide some glare protection from the side as well as the front. Chevrolet responded to the criticism of the previous year's steering wheel with an all new three-spoke leather-wrapped unit, which was well received. Chevrolet featured this new wheel prominently on the front of their new Corvette sales brochure. The new wheel came on all cars fitted with the optional tilt-telescopic steering column which was ordered on all but a few thousand Corvettes.[6] Corvette's refinement as a touring sports car continued as both power steering and power brakes became standard and new options included body-colored sport mirrors, cruise control, and a new convenience group. Cruise control was only available on cars with automatic transmissions. The convenience group included dome light delay, headlight warning buzzer, underhood light, low fuel warning light, interior courtesy lights, and passenger side visor mirror. The black exterior paint color returned (last offered in 1969).[6] Unchanged was the horsepower ratings for both base and L-82 engines. Early in production, the engine paint color was changed from Chevy orange to Corporate blue. The “Stingray” script, seen on front fenders since 1969 disappeared, but new cross-flags emblems began appearing on fenders before the model year ended. Windshield posts were now painted black for a “thin pillar” look and this was the final year of the "sugar scoop" tunneled roof-line and vertical back window.[32] A Corvette milestone was reached during 1977 as Chevrolet had built a half million Corvettes since production began in 1953. 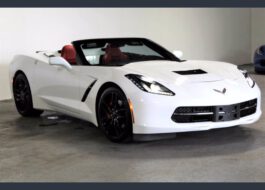 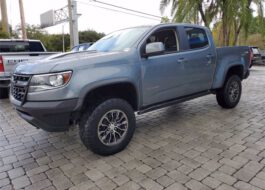